Aggressive Hitting Strategies That Will Make Your Team Better

Sometimes it pays to turn things up on the opposing defenses. By playing a more aggressive style of baseball, a high school baseball team can put serious pressure on a defense to perform.

Here, are some strategies that can help put the opposing defense in tough situations:

1. Take advantage of the 3 and 0 count. Be sure to give the green light to your power hitters when they have this kind of count. Many pitchers will throw a slower fastball right over the plate in order to get a strike. Let your best hitters swing away as an extra base hit would be better than just a simple walk. However, only allows for the top hitters as the weaker hitters should take the pitch trying to earn the walk.

2. Use the Hit and Run when the hitter is a weaker batter. This works especially well in situations where you have either a weak batter or a slow base runner. When the hit and run is executed properly, it is one of the most beautiful plays in baseball. More to the point: it can help you move runners in scoring position and reduces the risk of double plays.

3. Be sure to use sacrifice bunts and suicide squeezes. Bunting may not be the most impressive part of baseball, but it is one of the most effective for advancing runners and scoring runs. Plus, it puts tons of stress on the opposing defense to field the ball properly. In high school, it is not uncommon to see errors made by an errant throw. Keep the pressure on the defense by using bunting throughout the game. 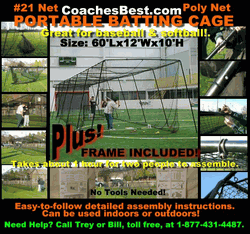 
4. Use a lack of awareness against the opposing defense. If there is a man on third and the batter draws a walk, have the runner jog to first then take his turn and run full tilt to the second base. If the catcher throws to second, the third baseman should head for home. This can work well because you can catch a number of defenses' off guard.

5. Use the catcher's arm strength against him. If you are a base runner on first or third and know the catcher has a good arm. Don't be afraid to entice him to throw the ball over to try to pick you off. Often times, a cocky catcher will end up throwing into the outfield on accident.

6. Occasionally use the double steal. If you have runner on 1st and 2nd and the runner on second is fast, consider doing a double steal. This works well because even if the lead base runner is thrown out at third you have kept a runner in scoring position by his stealing of second.

7. Give certain players the green light to steal third base. Contrary to popular opinion, you do not have to be the fastest player to steal third base. Instead, you only need reasonable speed and a good awareness of player tendencies. This can be done by lulling the pitcher into thinking you will not even attempt to steal by beginning to take a small lead off. Once the pitcher does not view you as a threat, he will go into his motion and this is where you start to creap off. If you do it right you will have a great jump and the catcher won't have a chance to throw you out.

8. Runners on 1st and 3rd: have the runner on 1st go run for second on the first movement of the pitcher. This is a classic tactic of little league baseball that can work well in high school especially when the runner on third is fast. Do not be afraid to use it as it also requires the defense to be perfect with their throws.

9. If hitters know that the steal is on, they should swing the bat in an effort to get in the way of the catcher's throwing lane. This cannot be too deliberate, but they need to protect the base runner when they can. This is similar to the responsibility of a base runner taking out the second baseman on a double play.

All of these tips and tactics are designed to put stress and pressure on a defense. The more pressure you put on an opposing defense the better because once one mistake occurs it can be very easy to create a snowball effect. All of these things work great for your team as you continue to play a team that now has a confidence problem.

One caveat: these tips require you to be comfortable with a certain amount of risk. Occasionally, these tactics will not work out as well as you would hope. However, you need to look at it the results cumulatively and not based on any one individual attempt. Your focus is on a building an aggressive mentality that we are going to do everything in our power to score runs and are willing to do anything to make that happen. This is a powerful mindset that can transform your offense into a powerful, proactive bunch. We think you will find this approach will give you more runs and wins over the long haul.

Jack Elliott, is a former player and fan of the game. To read more tips and techniques like the ones in this article, please click here: http://www.baseballtrainingtechniques.com/Baseball-Strategy/ or Baseball Strategy