Baseball - Top Seven Injuries That Will Plague Most Baseball Players 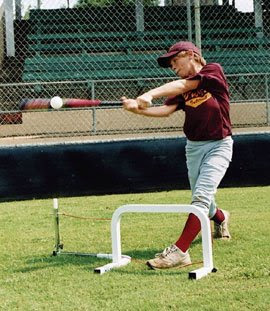 Baseball - Top Seven Injuries That Will Plague Most Baseball Players

Baseball injuries usually do not end a player's career. However, any injury can be a setback. With proper care and knowledge beforehand, the player will know what to look for, and will return to normal activities in a shorter amount of time.

The top seven baseball injuries that will plague most baseball players are described below.

Sometimes when a player is running for a base, he'll slide into the base and sprain his wrist. It hurts and it will swell, but most likely, the wrist will not get broken. Within a few days after cold compresses have been applied, and the wrist is later soaked in warm water, the wrist will be fine, and the baseball player will be ready to participate in his next game.

When a baseball player's glove webbing is improperly aligned at the moment when a ball impacts the glove, the player's fingers and hands will sting. However, most players will tell you that catching a ball with an ungloved hand can feel like being shot with a high-powered arrow.

Whenever a finger is exposed at any angle other than in an open and flexed state, the player will feel his finger joints getting crunched, dislocated, or broken. Catchers and infielders are the most common players to receive such finger injuries, but it can happen to any player, regardless of the position they're playing.

When a baseball player grabs a fly ball out of the air, he is most certainly prone to suffering from a hyper-extended knee injury.

Whenever a player's foot lands awkwardly after he has lunged for a fly ball, the knee joint takes the bulk of the landing. Although he may show the other players that he can walk off the immediate hurt, his knee joint will be sore for days.

When that same player pays attention to his knee's soreness, he will recover quickly. However, if the player aggravates the injury by playing several more innings, or another game within a day or two, the injury will worsen and the pain will reappear.

Another way that a player can hyper-extend his knee is when his spikes get jammed into a base that's fixed into place. The knee joint could twist in the wrong direction, thereby causing the knee to hyper extend.

Even the most in-shape and toned baseball player who appears to have strong muscled legs can be prone to suffering from a pulled hamstring when he's running at break-neck speed to catch a ball or run a base.

Mickey Mantle's entire career and Albert Pujols's existing career have been fraught with hamstring muscle pull problem injuries. The injuries are painful, and the player will most likely need to take some time off to heal, but his career will not be ended due to a pulled hamstring.

Whenever a baseball player throws a ball hard to one of his teammates, he becomes susceptible to a sore elbow injury the same day or the next day. Sore elbows heal fairly rapidly, so there's no need for medical attention, except to remember to reduce the velocity that a player throws the ball the next time he's out on the field. A sore elbow is caused when the player suddenly stops or slows down the fling. That action is known to cause stress at the elbow's bone joint.

7. Bruises on Legs and Hips

When a baseball player does not wear sliding pads, he is quite vulnerable to receiving big bruises and strawberries on his legs and hips from sliding into a base. The painful part comes when a well-meaning attendant tries to apply any medication that contains alcohol or witch hazel in it. You'll be sure to hear the player's screams from many fields away.

Bruises will change colors and are certainly sensitive to the touch, but they're not the most serious injury a player can receive. So, try to remain tough when you look in the mirror after the game and see raw fleshy spots. Within four or five days, the tenderness will be gone, and most likely the color of the bruise will have faded away.

Next, to view a baseball sports card of Mickey Mantle or Albert Pujols when they were not injured, you can take a look at some of their more valuable cards located at this site: http://www.americaspastime.com

Baseball sports cards and memorabilia are collectibles that have become a passion and business for sports enthusiasts and collectors around the world. For the latest in mint condition baseball cards, autographs, ticket stubs, and gifts, be sure to shop at stores that you can trust, such as http://www.americaspastime.com known for their physical store and their online business.

www.QuickSwingTrainer.com
Posted by Coach's Profile: at 5:04 AM