Baseball Coaching Tips - Should You Bunt Or Swing Away? 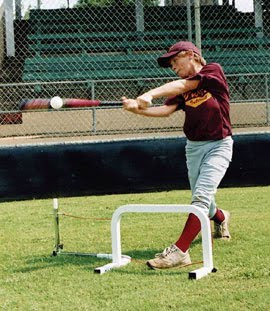 There are many things to think about when deciding if a team should go for the big inning or bunt and sacrifice an out to advance a runner with a sacrifice bunt.

A lot of it depends on what type of game it is and how late in the game it is.

A lot of it depends on the pitcher that your own team has on the mound. If you have a pitcher who is "mowing them down," a one run lead may be like a five run lead. With a real good pitcher, one run can be considered a big inning. If you have a pitcher who has been struggling, playing for one run may not be in your best interest. The one run that either ties the game up or puts your team ahead may not hold up.

If you have a batter that's followed by two very weak hitters, you might be better off having the player at bat NOT bunt, because of the weaker hitters that follow.

Times You Should Consider Bunting:

• You can bunt at just about any time during a game. A hitter should ALWAYS take a peek at the third baseman. I'm a big believer in taking whatever is given to you on the ball field. If you see a third baseman is playing seven steps behind third base, you should seriously consider a bunt down the third base line. Just try your best to make sure that the third baseman fields the bunt and NOT the pitcher or the catcher.

• Let's say it's late in the game and you have a man on second base with nobody out. If you have a right-handed hitter up who is a dead pull hitter, you might strongly consider having him bunt the runner to third base. He may very well hit a grounder on the left side of the infield which would prevent the runner going to third base with less than two outs.

• If a batter has trouble against a particular pitcher. If your batter is a good hitter but has a terrible past performance against their pitcher, the bunt should be strongly considered.

A tough call is should you sacrifice bunt if you are the visiting team and are trailing by a run in the top of the last inning? (You may be thinking of sacrificing a runner from first to second base or from second base to third base with no outs)

One of many baseball coaching tips is that the "book" says you DON'T play for the tie on the road. That may not be true 100% of the time. If your bullpen is FAR superior to the other team's bullpen, you should not hesitate to play for the tie, even though you're the visiting team.

You should gladly take your chance late in a game that's all tied up if you have a stronger bull pen!.

Larry Cicchiello is the author of several very informative baseball coaching books. All of his editions are included in "Excellent Baseball Coaching: 30 Seconds Away." Larry is unique in that his site offers visitors several FREE TIPS that are straight from his books. Baseball tips on hitting, baseball pitching tips, baseball fielding tips, baseball base running tips, baseball coaching drills and more. Your baseball coaching "help desk" will be open 7 days a week, 24 hours a day and 365 days a year. Larry invites you to check out his FREE TIPS. You will be FULLY EQUIPPED as a manager, coach, player at any level or a parent who wants to help their child improve or overcome any baseball struggles.

Check out our network of baseball blogs: