How to Hit a Curveball 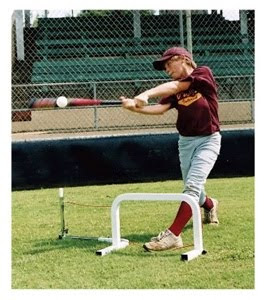 The curveball has been a universally feared pitch in baseball for more than a century, and with good reason. If you've never seen a good curveball from the batter's box, it can be difficult to appreciate its effects on the hitter, but be assured that it brings a whole new challenge to striking that small round ball approaching between 70 and 100 MPH, with a round bat ---- you literally have less than a second to decide to swing the bat.

The challenge is especially intimidating if you haven't yet had much experience with curveballs and other "junk" or "breaking" pitches. Watching even professional hitters, check that, watching even the very best professional hitters, buckle at the knees and turn into jelly at the mercy of a nasty curveball is really pretty astonishing.
With all that said, the curveball can be hit, and you can improve your ability to hit the curveball with some thought and some practice. Let's break it down.
Being Prepared
While not specific to curveballs, the first thing a hitter needs to do to be successful with the curve is to be prepared. What do I mean by that? Well, there are many factors to preparedness, but the basics are:
· Knowing the pitcher and what kind of "stuff" or pitches he has, and how he uses them (i.e. in what situations). This is why it's important to watch the pitcher closely from the dugout as he's pitching to other batters.
· Understanding which counts you're likely to see which pitches so that you can properly anticipate the curve or breaking ball. For example, you will rarely get a curveball on a 3 ball count unless the pitcher would prefer to walk you than throw you a fastball. Hitting strategies related to pitch count are a topic worthy of discussion by themselves, but suffice to say several factors go into this art, including the score, the inning, whether there are runners on base, the pitcher's command on that particular day, and so on.
Recognizing the Pitch
In order to hit the curveball you need to recognize that the pitch is a curveball, and you need to do that in milliseconds. Seems simple, right? It's not, but it's an absolute requirement if you want to consistently hit curveballs. There are a couple of key things to watch for:
· Pitcher's tell - every pitcher is different; however many give away clues while positioning their hand prior to the pitch, or they slow their arm speed during delivery, and/or their arm angle changes during delivery. This is yet another reason it's important to watch the pitcher from the dugout as he's pitching to other batters.
· Rotation - there are different types of curves and they all behave a bit differently; however they all require ball rotation that's pretty discernable, although again, you've less than a second to pick that up AND decide to swing.
Hitting Mechanics
The key with the curveball is to resist the urge to act too quickly. The pitch speed tends to be slower than most other pitches, certainly slower than a fastball, and most hitters have a difficulty "staying back". Once they've committed themselves they attempt to adjust themselves during swing execution which often results in a swing that's severely flawed mechanically. So even if you make contact with the curve you don't hit it well. If you feel yourself out of sorts, particularly if your weight is forward, its best not to swing unless you must (i.e. you're protecting the plate).
The curveball, when used effectively can be a wicked pitch to hit, but it is in fact hittable. Many hitters love the curve if they've anticipated it, or if it's hung in the strike-zone. Many a hanging breaking ball finds itself planted in the bleachers for a round-tripper.
When it comes to hitting curveballs, like most things, a thoughtful approach, practice and experience are the keys to success.
Pillows
Article Source: http://ezinearticles.com/?expert=C_Randolph
The 4 Best Batting Tees in Baseball:
Advanced Skills Tee
Stay Back Tee
Hands Back Hitter
5 Position Batting Tee
Posted by Coach's Profile: at 4:05 AM