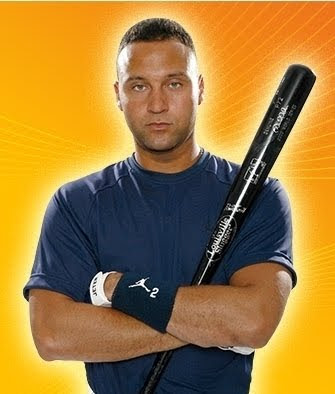 Derek Jeter's mental approach to baseball is one that every player, coach and parent should take notice of. He is a true American Sports Hero yet he does not consider himself bigger than the game itself. His words and quotes reflect his attitude, his commitment, and his love of the game.

What can all baseball coaches learn from Derek Jeter's mental approach to the game? He is one of the most "decorated" Major League baseball players in the past decade. But, more impressive than his talent is his ability to keep the game in proper perspective mentally. He is humble. He knows how important the game is to him. He appreciates the opportunity he has to play the game and he considers it an honor to wear the pin stripes. In this article I present Derek Jeter quotes that I feel reflect how every player should approach the mental part of the game.

Derek Jeter helped the New York Yankees win the 2009 Major League Baseball World Series. The win earned the franchise's 27th World Series Championship. In 2009 Jeter made his 10th All-Star Team. The list of honors and awards Jeter received in 2009 is extremely impressive. He Won his 5th World Series Ring. He became the all-time Yankee leader in hits. He won his fourth Gold Glove. He won his fourth Silver Slugger award by batting .334 with a .406 On-Base-Percentage. He won the Hank Aaron Award as the best hitter in the AL. He received the Roberto Clemente Award for his commitment to service in the community. He was honored with Sports Illustrated Sportsman of the Year for his overall accomplishments in 2009. But, what is more impressive that his honors and accolades is his mental approach to the game.

Derek Jeter considers himself blessed to play the game of baseball. He does not look at himself like many pro athletes do. Many pro athletes consider it a privilege for the game to have them as a player. They put themselves on a pedestal above the game itself.

All coaches should be happy if they players take the same mental approach to baseball as Jeter does. Here I take three Derek Jeter quotes that I feel reflect the proper mental attitude for any player at any level to have toward the game.

Quote #1 This quote reflects Jeter's thoughts about the importance of having fun and enjoying the game.

"You have got to have fun. Regardless of how you look at it, we are playing a game. It is a business, it is our job, but I do not think you can do well unless you are having fun." Derek Jeter

It is refreshing to see a Major League Baseball All-Star like Jeter feels that having fun should be a priority. I feel that more players, coaches, and parents should share that same sentiment. Many coaches and players forget the fact that baseball is just a game and games are meant to be played for fun!

Quote #2 This quote shows that Jeter values defensive play and pitching as keys to winning.

"That is how you win - pitching and defense." Derek Jeter

This quote is coming from one of the best hitters in Major League Baseball History, yet he is makes it clear that he considers pitching and defense the keys to winning. Maybe some coaches and players should put more emphasis on the defensive aspects of the game.

Quote #3 This quote reflects how important Jeter thinks it is to keep working and improving. This quote shows the importance of staying focused and staying "hungry".

"We just want to win. That is the bottom line. I think a lot of times people may become content with one championship or a little bit of success, but we do not really reflect on what we have done in the past. We focus on the present."Derek Jeter

As you can see from Jeter's quotes, he does not put himself or his success above the game or his team. He shows a commitment to continue improving and working hard. His love for the game is obvious. He is an inspiration to anyone that watches him play.

I hope that you enjoyed this article. Thanks for taking the time to read it. Have a great day, Nick.

The CoachesBest Baseball Store has a great selection of 1400 Baseball Products. Check out the BatAction Hitting Machine baseball pitching simulator. This high speed training machine is 100% Guaranteed to raise Batting Averages and has a full year warranty.

Nick Dixon is the President and founder of Nedco Sports, a sports training company established in 1999. Dixon is also an active and full time high school baseball coach with over 25 years experience. Coach Dixon is better known as the inventor of the BatAction Hitting Machine, the SKLZ Derek Jeter Hurricane Hitting Machine, the SKLZ Target Trainer, the SKLZ Derek Jeter ZipnHit Pro, and the SKLZ Strikeback Trainer. Dixon is also a contributing writer for BaseballCoachingDigest, the Youth Baseball Digest, the Baseball Parent Guide, the Baseball 2Day Coaches Journal, and Blog4Coaches.

Baseball2u.com/CoachesBest.com is the ultimate online baseball training and coaching store. With over 1400 products organized into categories Baseball2u.com makes finding that baseball training product easy and simple. Order securely online or by phone. Baseball2u.com is a fully licensed company and has a full time staff available from 8:00 to 5:00 CST. Their toll free customer service number is 1-877-431-4487.