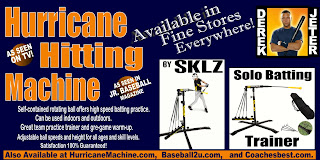 Many youth pitchers hear "just throw strikes" and they do just that. Many pitchers start aiming the ball and they forget about their basic pitching mechanics. They may slow their motion down; not exploding to foot strike. Many pitchers often open up to soon taking more of a step instead of a strike to home plate; guiding the ball over the plate instead of simply throwing it. The pitcher begins to throw batting practice and the batters begin to tee off. Yes your pitchers are throwing strikes, but they are often right down the heart of the plate with no velocity behind the ball. See ya! Game over! You Lose!

If you are a coach, you will do more harm than good throwing out little comments like "just throw strikes", "rare back and fire", "throw hard now", "get er done" what do all of these things mean to your pitchers? Do you know what they mean?

Every pitcher is going to have a different interpretation of what these things mean unless you are very clear in presenting to them what they mean. What does "rare back and fire" mean? We have all heard that one. Does it mean to rock back and throw as hard as you can? If so, a pitcher will lose all control of the baseball if they rare back because they lose their balance. What does "throw hard now" mean? When you tell a young pitcher to throw hard, what do they usually end up doing to their pitching mechanics? One, they never try to get power from their legs, hips, torso and shoulders (entire body) as they should; they use too much of their arm to throw when trying to get more velocity. The only time these small innuendos work is if the coach explains to the pitchers what the terminology means. Otherwise these words are just filler words for lack of better education.

It's time to get educated on proper pitching mechanics.

Nate Barnett is co-owner of The Pitching Academy.

After finishing a professional career in the Seattle Mariners Organization, Nate pursued his coaching and motivational training career. You can find The Pitching Academy's videos, blog, and more articles when you visit the website.

Baseball2u.com has a one of the internet's largest selections of baseball coaching and training dvds.