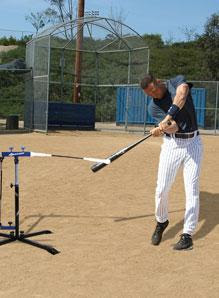 On one side of the fence you have linear mechanics and on the other side rotational mechanics. Both advocates think their hitting system is better than the other.

But a really simple way to end the argument is to watch what the mechanics the best players in the game are using.

Are they linear hitters or rotational hitters? Anyone who has studied the swings of the greatest players dating back to the time of Babe Ruth understand the best hitters in game are using a mixture of both mechanics.

Primarily most hitters use 95% rotational mechanic and around 5% linear mechanics.The only linear characteristic they use in when they transfer their weight from the front side to the back. Most elite hitters in college and professional ranks rotate into the baseball. This goes without debate.

All you have to do is study their swings to see how they're generating power and having more success than the average player. The problem which is causing many players to not reach their maximum potential boils down to poor hitting instruction.

Many coaches to this day use phrases like throw your hands at the ball or hit the top half of the baseball. Which leads to a loss in power and performance at the plate. When have you ever seen a professional player swing down on a baseball?

Never, unless you count a handful of Japanese players who have had some success in the Major Leagues.

The thought process behind liner vs rotational hitting ends when you begin proper swing analysis of the best players in the game.

Want to learn the proper mechanics to hitting a baseball?

Because your current mechanics are zapping your power at the plate.

Baseball2u.com has a one of the internet's largest selections of baseball coaching and training dvds.
Posted by Coach's Profile: at 4:03 AM