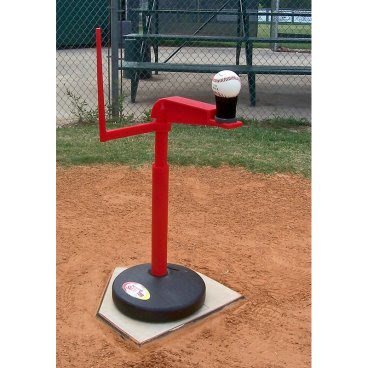 Baseball is the most "in and out" game there is in sport. A baseball player goes from live to not live between 140 and 170 times per 9-inning game. Some positions, like pitcher and catcher, force the player to be in focus more often. However, they, as well as the other 7 players on a field, can benefit from techniques to transition from "in" to "out" and back to "in" mentally. Each player needs to establish routines that allow him to be "on" every time he is suppose to be. The "off" time is a time when these routines are set into place. Routines allow the brain to go from the left brain's organizing and setting up to the right brain's action and follow through. These routines are like triggers. They put the player in the proper mindset. Players should study other player's routines to get ideas for what may help them.

The hitter needs to develop a vision routine. The eyes work best when binocular (using both eyes), when on a horizontal plane, and when used in a scanning fashion. A hitter should develop a vision routine that works for him. Ex.: the hitter looks at the pitcher's feet and when they move, his eyes move to the pitcher's hat. At that point, the eyes move again when the pitcher's arm comes into the release slot. The hitter's eyes jump (scan) once again to the ball where they begin to track it in a lane to the hitting zone. The length of time one can intensely concentrate, like needed in hitting, is about one second. Since an 85 mph fastball takes about.5 seconds to get to the plate upon release that means the hitter has to start concentrating.5 seconds before that, which is when the ball is coming up into the release slot. If a hitter starts to concentrate too finely too soon he will end up seeing the ball only in his peripheral vision. A vision routine guarantees that a player uses his eyes as scanners and does not lock into his fine concentration until the appropriate time.

Hitting, pitching and defense can benefit from a breathing routine. Proper breathing is a trigger for the body to relax, which can put the mind into a proper mindset. An example of a trigger is when you are listening to a CD or iPod play list that you have heard many times. You automatically know the next song in the sequence. You often start singing it or hearing it before it actually starts. This is a trigger. The last song triggered the next song in your head. In baseball, the player needs to plan these triggers in a conscious state (a routine) and then allow them to be carried out unconsciously. The breath, as a trigger, should come from deep down in the diaphragm. The breath feels like it is coming from the stomach. A breath through the mouth results in an upper chest shallow breath. A proper breath oxygenates the brain and the muscles better than an upper chest breath. This is because there is more blood in the bottom of the lungs and when the breath gets oxygenated better it does better things for the central nervous system. The two types of breathing create two different results. Upper chest breathing during performance stimulates the fight or flight mechanism. This emergency state of mind causes the body to produce stress chemicals like adrenaline and lactic acid. In contrast, if oxygen is pulled more deeply through the lungs via nasal breathing a calming relaxing feeling takes place. This is because this type of breathing triggers impulses in the body's parasympathetic nervous system. Breathing is the bridge between the body and the mind. Your brain weighs about 2% of your overall body weight, but takes 20% of your oxygen.

Pitcher's Routines Pitchers need to develop routines that put them into the right frame of mind. More on this can be found in the pitching section in section 8. Routines, including breathing ones, can help create the conditioned responses that were discussed in section 6. An example of a pitcher's routine - while standing on the rubber, take a deep breath through the nose slow, deep and calmly. Let it out as you get your sign and location. Then imagine the lane you are going to throw in. Blacken out around it, and see a trail of balls going precisely down that lane into the catcher's glove. Follow with the real pitch to the same spot. Some pitchers use self-talk to design their routines around. Remember the mental message can dictate the physical action. The dirt circle is a good place for positive self-talk. If you, as a pitcher, find yourself talking negative, get out of the dirt and say anything you want to yourself. Then get back in and start your positive routine. "I am coming at you; get ready for my stuff..."

Hitter's Routines - Hitter's routines often start with quality uninterrupted on deck time to study the pitcher and reflect on what he is about to do. Then the routines progress to the actual at bat. There are so many different ways to get into the right frame of mind. An example of using Positive Image Flashes (PIF's) - First, start with a vision routine like described before. While waiting for the pitcher to move his feet, visualize a pitch coming down the lane and seeing it being hit exactly where you want it to go, like up the middle. Then when the pitcher moves his feet, continue with your vision routine to put yourself in the best position for it to really happen. There are a lot of routines that have body actions that help a hitter relax and get into the right frame of mind. Ever watch a cat pounce on a mouse or some toy? It crouches down and then slowly wags it tail giving itself timing and readiness. Then the cat quickly strikes at its prey. This is a great example of a routine. Hitters often wag their bats much like the cat's tail. Just like the pitcher can use the dirt circle of the mound to talk positive or negative, so can the hitter use the dirt circle around home plate or use the batter's box itself.

Fielder's Routines - Fielders need routines to take up all of the dead time between pitches. These routines should be designed keeping two things in mind. One, a routine that allows for focus and movement right before the pitch, and two, some sort of planning stage when the ball is not in play. An example of a fielder's routine - Have an imaginary circle that can be placed anywhere you desire depending on the situation. When you walk out of this circle it triggers the planning stage. Quickly figure out all the possible scenarios and what you will do with the ball. Walk back into the circle, which represents your unbeatable zone. When you are in that circle you are unstoppable. You take every ground ball personally. If 27 balls were hit to you, you would make 27 outs and win the game. This circle makes you super-human every time you step into it. You suddenly feel quicker and more ready.

For more on routines check out The Cognitive Advantage Program's website!